Why don't you try a 5k, 10k, or a half marathon in the next few
months?
Need more persuasion, check this out
Just put on your trainers and go for a jog..... 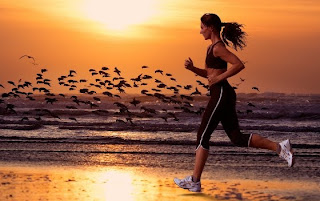 Having missed out on getting a place in the Great North Run half marathon in September, I entered the Amsterdam half instead. Not a difficult task, said most people who consider a 13 mile run of no consequence to a fitness trainer.
In reality, unless you are a natural runner, with endurance built in, and a taste for running endless distances for pleasure, distance running is something that needs careful training, preferably over a fair amount of time. And with the state my knees are in, I fit like a glove into that category.
I completed the marathon in 2 hours and 14 seconds. Considering the furthest I had ever run non stop was the 10 miles from Blackpool's north pier to Fleetwood in 2008, this was a decent challenge overcome.
My main concern had been the state of my knees. In particular, a condition known as runner's knee and some sore tendons at the front. symptoms of runner's-knee kick in after running for about half an hour, as the thighs and buttocks muscles tighten up, and start pulling the tendons around the knee tight. The result is pain on the outside of the joint, the sensation that your legs are twisting as you run, and the added feeling that your legs no longer want to do what your brain is telling them.
That is what happens when you endure beyond your normal range of ability. The relationship between brain and body disintegrates, and your mind is left somewhere in between, half in pain, half in determination to finish, and as, someone once said - you're mind starts writing cheques the body can't cash. It is this test of mind over flesh that gives people the sense of achievement at the end. Similar, I guess, to all sorts of daring activities people do involving a perceived or real threat to their lives, and overcoming it to jump out of a plane, to ski fast, to ice or roller skate, hand glide, ask for a bank loan etc.
As lactic acid builds up, the nerves and the muscles start to stutter and fail. In training, this is desirable, as it provokes a change and an improvement, over the weeks (without training, this occurs half way through your London Marathon, and you either quit or endure 2 hours of agony and futility as you walk the remainder of the course). As you run further, each time you train, your body responds by adapting, and giving you more endurance. The circulation deals with the lactic acid faster, and for longer. You gradually increase your stamina this way until you are near the target race distance. Most will train up to a small fraction below the target distance, as if aiming to run on fumes for the final 10% of the distance. In the 26 mile distance, some say that running beyond the 4 hour mark, or the 20 mile mark, is critically damaging to the tissues. To that end, they might train up to the 20 mile mark.
For smaller distances, as you feel yourself improving, you may set yourself a target time in which to complete it, and train not only on stamina, but on speed too. This involves other disciplines and intensities.
In my experience, I under-prepared for the race, training up to 8 miles, or 80 minutes. During the hours up to the 13 mile run, I was genuinely concerned about not finishing, and also for my health. After the run, apart from the general agony and lack of mobility in my legs, I felt elated and satisfied. 4 days on from the run, and I feel as if I could, if I really put my mind to it, do it in a quicker time. I feel inclined to attempt another 13 mile run soon, to test this.
The experience was a challenge overcome. It was not entirely pleasant, which made the completion of it all the more satisfying. A fine sense of achievement, and a very good night's sleep.
Posted by Paul at 15:31 1 comment: